Music on the Lawn – May Day Edition

Music on the Lawn – May Day Edition

Featuring:  Brothers Ray & Arti Cepeda and The Season of Us Band! 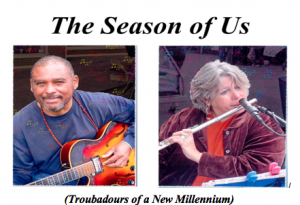 The Season of Us is a Heartfelt Musical Duo who play exclusively from a Conscious Loving Space.

Stephanie Greivell performs on the Alto and C Foot Flute and composes.

Bill Stanfield plays all Guitars (6 and 12 – Acoustic and Electric) and composes.

SOU are BMI composers and have had their music on such TV Networks/Shows as:

The music incorporates a range of musical styles such as: Light Latin Spices, Bossa Nova Blends, & Jazz Colorings. Their Infectious Grooves can’t help but stimulate your spirit and touch you at a Deep Soul Level. If you allow yourself to be taken, these gentle harmonies and flowing rhythms will open your heart to experience yourself and your life in a new and different way.

Since retiring from the “Hollywood Scene” they travel throughout Northern California sharing their music on a “grass roots level” at Jazz & Art Shows, Farmers Markets, City Events, Malls, Airports and Private Events. 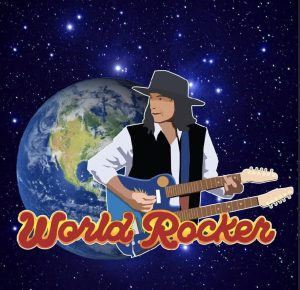 Ray Cepeda is a singer/guitarist who has been playing high-energy Latin and rock music around the Bay Area for years. One of his chief collaborators is the percussionist Jose “Chepito”Areas, best known for his work with Santana and Malo.

Born on the border town of El Paso Texas. The music from both sides have deeply influenced His music. A combination of rock, latin and world influences comprise this music. A ex governor of San Francisco chapter and voting member of the prestigious Grammy, Recording Academy, NARAS.

Ray Cepeda, Responsible for “all the above”, the know how, to make things happen. Command of Technology along with Singing and Guitar playing, had a  Top #5 hit on iTunes in Japan with remake of “Just the Two of Us” from CD entitled “El Matrimonio del Sol y Luna” that climbed to # 7 in Japan (2006) and stayed there for over 6 months.

Ray Cepeda, Guitar, Cuban Tres, Bass, writes music and Sings Lead Vocals. The songs are sophisticated chord progressions embellished with haunting melodies in English and Spanish. He is very dynamic performer on stage. When asked what type of music he plays Mr. Cepeda says, “It’s mostly dance music, in a World Rock flavor”. Check out, Mi Gloria and Barretto, from the latest 2019 project, “Areas 51: Return of the Alien “, collaborated with, Jose “Chepito” Areas from the original Santana Band. The music speaks for itself. Check it out.