DUE TO COVID-19 → IT IS MANDATORY THAT PLAYERS BE VACCINATED FOR YOUR SAFETY AND OTHERS…PLEASE RESPECT THE HEALTH AND SAFETY OF YOUR FRIENDS.  THANKS.

The highlight of Lupin’s Volley Season is “The Stout” Competitive Volleyball Tournament.

The Stout Volleyball Tournament – Summer of 2022

Meet at the volleyball court. The Stout tournament starts at 11am. Teams are okay. We welcome new players, but for safety reasons, we ask that beginners be familiar with the basic rules and skills required for team play.

Welcome to the best Buff Volleyball in the Bay Area or play “clothing-optional” if you prefer keeping your tan lines. Lupin Lodge holds seven weekend volleyball tournaments in prime season each year for experienced players to get together for competitive fun in the sun. Non-member players and teams are especially invited to participate and are offered discounted admission and camping rates

With a few exceptions Lupin tournaments are held once a month beginning in April and ending in October. See current year tournament schedule above for specific dates. Starting times are at 11am. (The court is available for doubles, team practice or open warm-up play until then.) 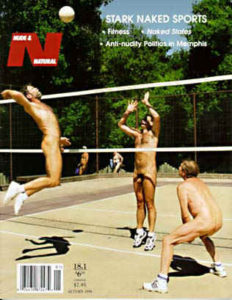 Lupin Volleyball, as illustrated on the cover of The Naturist Society’s magazine, Nude & Natural 18.1.

Please wear light-soled, court shoes only. The outdoor court has a special padded surface and players are required to wear the type of athletic shoes with scuff-proof soles appropriate for an indoor gym floor. Black-soled running shoes and playing without shoes are not permitted.

Most of the players will have had some competitive volleyball team, league or tournament experience. Experienced beach players are equally welcome. All tournament entrants must demonstrate basic ball-handling capability to USVBA standards. Beyond that minimum requirement, skills levels may vary, as do the ages of participants.

Complete, six-person teams may enter as a team, or lacking enough players, be assigned additional members. Most tournament players usually arrive as individuals, often with a friend who also plays. A general goal of the Tournament Director, who makes team assignments of individual players (while seeking to balance power and setting skills as well as overall athleticism), is to provide competitive matches among all the teams. Often the prize is up for grabs until the last match of the day. Tournament newcomers should arrive at least 30 minutes early to demonstrate basic ball handling skills and receive a team assignment.

The tournaments are free for Lupin members. Non-member players and accompanying fans in the same vehicle are entitled to a discount off the Lupin admissions and camping rates they would normally pay and are not charged further for tournament participation.

Special pricing of $17.50 for players who check-in before noon.

Volleyball was the first sport introduced at Lupin when the club was founded in 1936, and it remains the favorite. The game was played only recreationally until the early 1950’s, when a former volleyball coach at the Olympic Club in San Francisco began teaching power volleyball strategy and correct ball handling techniques to his fellow Lupin members. Together, they coached other beginners at Lupin to become competent players, which became a club tradition spanning generations. Many Lupin-taught players have subsequently competed in various volleyball leagues around the Bay Area. The current annual Lupin Tournament series, open to non-member players and teams, began in 1979.